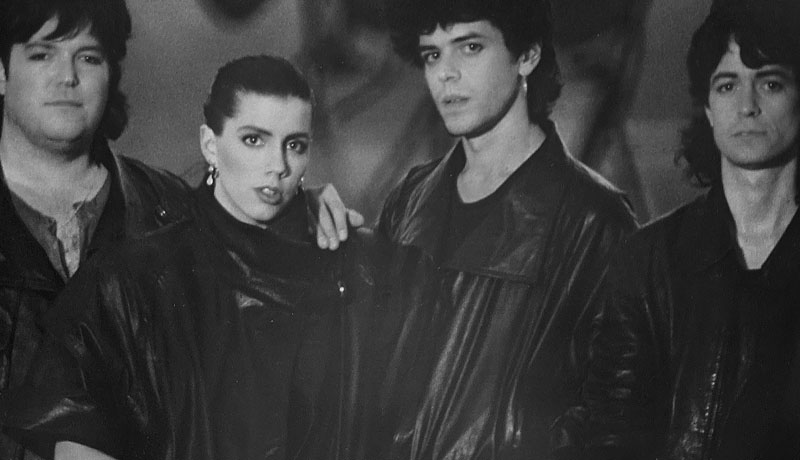 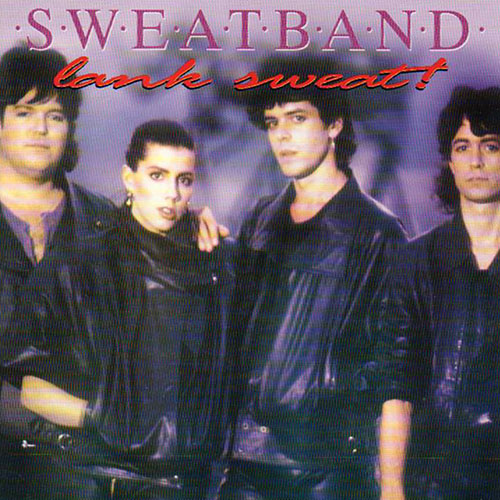 “Lank Sweat” brings together for the first time on disc not only all the original tracks from the classic “No Sweat” album but seven tracks from the unreleased second album, all digitally remastered in the true Retro tradition… and it’s on these tracks that he can hear just how far the Sweatband had progressed from the original album… songs like “Down in Africa”, “Just an emotion” and “Nobody else” is a gigantic quantum leap in every department and further underscores the fact that in John and Wendy the band had a songwriting team and dynamic live duo that was the equal of any major international group. So here it is … the ultimate and complete Sweatband retrospective … Lank Sweat ‘bru!

In many ways the mid-’80s was the pinnacle of the SA rock explosion… fantastic bands like Petit Cheval, Bright Blue, Tribe After Tribe, éVoid, The Helicopters, and The Dynamics ruled… the clubs were full of young people, fuelled to the max on Castles, wine and pills for all ills, all looking for a jol! If you just wanted to dance then there were clubs just for that but young South Africans, wanting to forget the political crap of the Nats, dead-end jobs, bland radio, and blander magazines wanted to rock… and none but none rocked harder than the mighty Sweatband.

No one who was at the old Jaggers nightclub in Rosebank will ever forget the sight or the sound of Dieter Stutz and Leslie Cook laying down the wickedest rhythm grooves: sultry sex siren Wendy Oldfield wailing her soul all the way to Valhalla and manic guitarist John Mair prowling the aisles and tables of the club with his 100-foot lead, Flying V ablaze … ripping, shredding, hammering out cascading notes of pure rock guitar genius! No, no one rocked harder than the Sweatband…

John & Dieter….. In essence, there were four Sweatbands. At the center core however was always the rhythm section of John Mair on guitar, Leslie Cook on drums, and Dieter Stutz on bass. Founder members John and Dieter included an old school friend of John’s, Les, and started rehearsing in a cramped, non-ventilated room at the back of Leslie’s house in Rondebosch, Cape Town. This hot little room was the inspiration for the band’s name. Rehearsals went on for a full year before the first singer, Ayala Katz joined (Sweatband Mark I). This yielded the cassette album “Partners in Crime”, recorded in a garage, featuring various backing vocalists, sax players, etc. In 1982/83 it received some airtime on radio 5 on a Tuesday morning in “South African Hour” with Chris Prior. There were only just a few live performances, after which Ayala decided to leave the band to pursue a career in jazz. After that Leslie’s brother’s girlfriend’s classmate at the teacher’s training college was hired ….Sweatband Mark II was created with Wendy Oldfield as a vocalist.

Wendy… I was studying at Barkley House Teachers Training College to give myself something to do whilst waiting for a career in music to happen… Sure enough, it did! One of the girls studying with me, knowing that I could sing asked me if I would be interested in auditioning for her boyfriend’s brother’s band – the Sweatband… I was like “Uh The Sweatband?”… not really with that name but I decided to go and check it out. The first thing that Leslie Cook asked me was whether I would dye my hair black and did I shave my legs? I also noticed that they were pretty fixated on my boobs which I guess is pretty much rock ‘n roll boy stuff! I still laugh about the fact that they never asked if I could sing!!
After the first rehearsal I was in..there was palpable energy between the four of us, some kind of special magic. We rehearsed day and night… John wrote all the songs which I was pretty in awe of and I was an avid pupil learning the songwriting craft from a musician that I still regard as one of South Africa’s top and prolific writers. We were dedicated to our music as any new band could be, and it showed. After slogging it out for two years in Cape Town we moved to Jo’burg and signed with Patric van Blerk’s PVB label.

John & Dieter …. he Sweatband Mark II began rehearsals and recordings in mid-1983. Stellenbosch was chosen as an ideal testing ground for live gigs due to the large student population. National service put a six-month halt to all proceedings from January to June 1984, but by July that year, the band was up and running, playing every Friday and Saturday night, first at ” The Akker” and later at “The Stal” for a period of a year. This time was the formative period of the band, which produced the hit songs and the material for the first album. The album “No Sweat” was recorded in Nov/Dec 1985 at Spaced out Sounds with Kevin “Caveman” Shirley at the controls and was released in October 1986. The hit single “Tonight” will be remembered from Stellenbosch as the “lying down song”, a song in which the band deserting the stage, to lie amongst the audience on the floor, leaving Leslie on drums to hold the fort on stage. In general, the band held the opinion, that the students in Stellenbosch were an affable audience, but mostly too drunk to take in what the band was playing. This was proved to be wrong, when at an intervarsity after party at the “Pig and Whistle” in 1985 a couple of very drunk “Maties” stood up on a table, while the band was setting up and proceeded to sing Sweatband’s songs back to the band, word for word!

National service/University/Teacher’s Training College all completed at the end of 1985, the band headed for Johannesburg with an album under the belt, but no deal as yet. A seven months struggle to survive, playing at clubs saw the signing of a deal with Patrick van Blerk and the release of the first single “This Boy / Sleep Like A Child” in June 1986. The move from the “Pretoria Holiday Inn” to “Jaggers” in Rosebank saw the most dramatic change the band was ever to experience. From an audience of three old men and two hookers to over-capacity crowds, five nights a week. On the first night the manager of the club (the now famous DJ Leon Econimedes), when quizzed what all these people were doing there, replied: ” They’re here to see you!” Leslie, John, and Dieter walked off to the office/changing room in total hysterics. It was real nice to have a boss with a sense of humor. After two weeks of capacity crowds, the truth finally sank in: we were famous! “This Boy” really took off and gave us our first Top 20 hit. The following six months were largely the happiest days of the Sweatband, playing many great concerts, not least heading the “Rand Easter Show ” in 1987.

Wendy… Unfortunately like with a lot of successful bands too many worms crawled into the woodwork and a rift developed between the members of the band. It was very devastating for me ‘cos The Sweatband was like a marriage to me and John, Dieter and Les were kinda like my guys you know?

John & Dieter ….. Fame and fortune however brought many pressures to bear on the band, kind of stuffed it up! There were disputes between the management, record company, and producer over various issues. This left the band in the middle somewhat bewildered, being forced to take sides. When the dust had settled, there had been a large management reshuffle, which ultimately spelled the demise of Sweatband Mark II. Enough said! The sad thing was we had completed the second album, again with Kevin Shirley at the mixing board but the album was shelved… until now.

The band recorded a final single in September/October 1988 and finally disbanded in November that year.

After that, Sweatband Mark III featured Michelle Bestbier and Kelly Hunter as vocalists and although we gigged around as hard as we could it couldn’t sustain itself.

Sweatband Mark IV saw Michelle Bestbier replaced by Tanya Malherbe, but neither of these formats was successful in replacing the chemistry of Sweatband Mark II.

John and Wendy rejoined forces in 1989, which produced the single “Acid Rain”, written by Wendy, and a huge solo single for her. But the partnership and various band members never really jelled. John went on to do live engineering concerts and has since survived playing as a solo musician and a record producer. Wendy is happily married with two children and has released several critically acclaimed solo albums. John and Dieter are both divorced with one and two children respectively. Leslie lives happily married in Australia with two daughters.

The Mark 2 lineup got together for the first time since the late ’80s in September 2002 for a scorching set at the 94.7 Highveld “Heritage Day” Concert confirming once again just what a great live band they are. 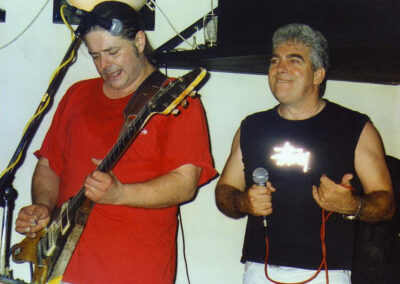 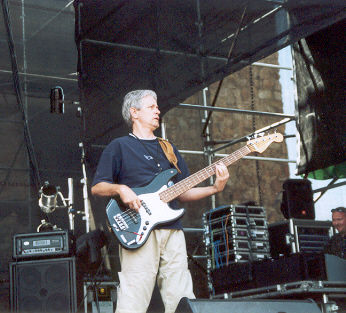 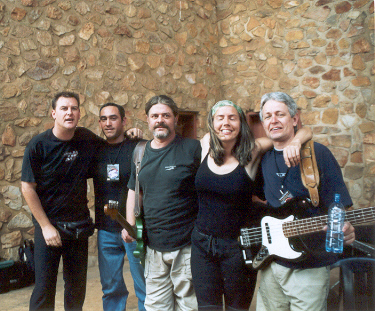 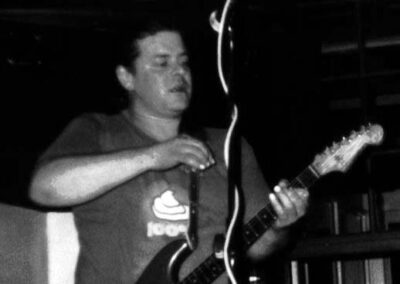 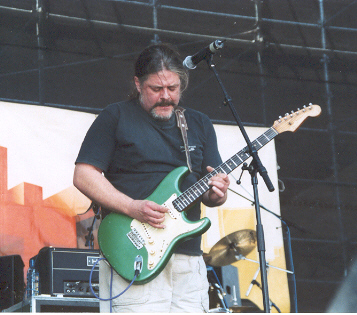 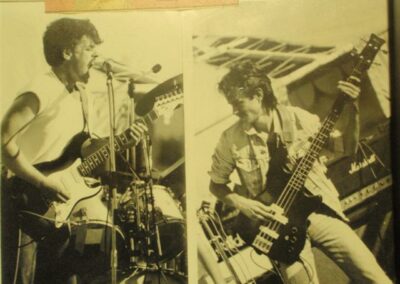 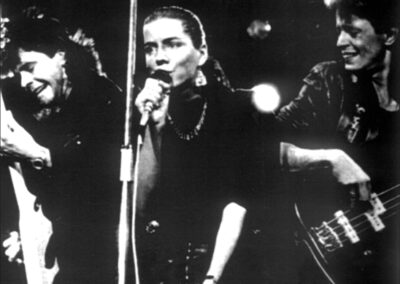 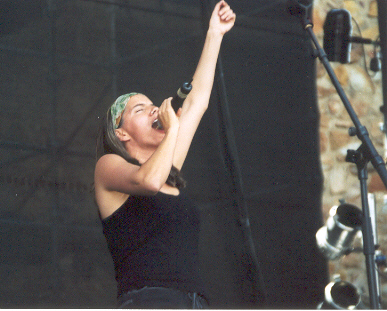 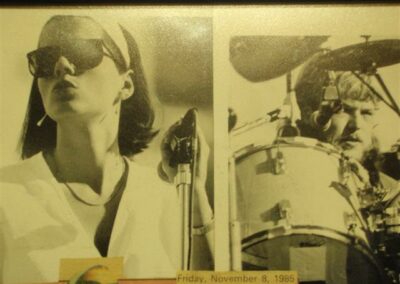