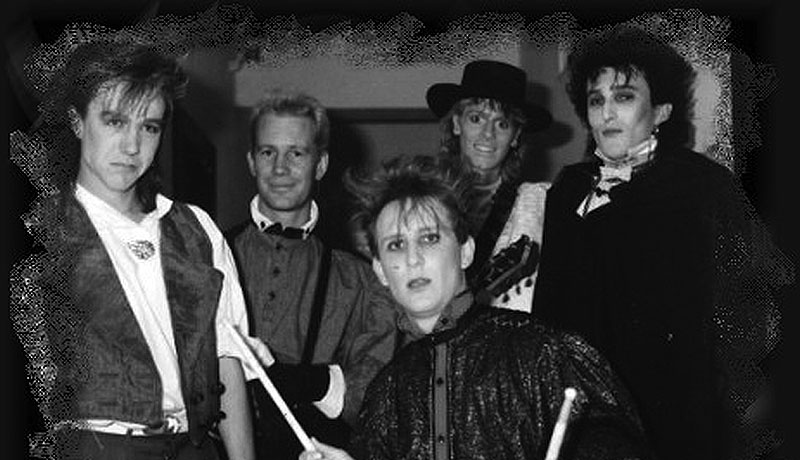 Fronted by one of the greatest live performers of the time, Jon Selby, Petit Cheval ruled the pop/rock airwaves and stages of South Africa from 1984-86 with multiple hits including “Magical touch”, “It was the wind” and “Once in a lifetime”. Newly remastered, this definitive Petit Cheval compilation gathers together all the tracks from the band’s two albums plus the debut single as well as new liner notes and rare pics from the band’s archive.

Fronted by one of the greatest live performers of the time, Jon Selby, Petit Cheval ruled the pop/rock airwaves and stages of South Africa from 1984-86 with multiple hits including “Magical touch”, “It was the wind” and “Once in a lifetime”. Newly remastered, this definitive Petit Cheval compilation gathers together all the tracks from the band’s two albums plus the debut single as well as new liner notes and rare pics from the band’s archive.

Once In A Lifetime

In 1984 a band from Pretoria punched a hole in the sky with music that defied conformity and the quiet norm. PETIT CHEVAL was borne of a time in South Africa when originality was the exception, and only a handful of bands delivered music that has transcended three generations to remain as vital and addictive as when it was played for the very first time.

At a time when George Orwell’s novel 1984 was enjoying space in the very year it spoke of, where “Big Brother” was watching, back home in SA, Jonathan Selby, Sheldon Thomas, Craig Else, Johan Griesel, and Danny de Wet were being ogled for very different reasons. These ambassadors of originality were making people sit up and listen everywhere they played. “After having joined the army band during my national service, I knew when I finished up that I wanted to be in a band,” Jon remembers. “When I did, drum machines had just become popular and I bought a rather antiquated one and I started putting some tracks together. I made a rough demo, and a rep from WEA Records came into the clothing store that I worked at in Pretoria, and I gravitated towards him and handed him my tape and asked him to critique it for me. He took it back with him to Jo’burg and passed it around the office.”

Kim Saville, who worked in promotion at WEA was the first to recognise the potential in the songs. “The music and the lyrics are what caught my attention,” she recalls. “Jonathan sang with a lot of emotion and just fuelled what was already accessible in its musicality.” The fledgling Cheval at this stage included Francois on drums and Harold Shenk on keyboards, alongside Johan on bass with Jon handling guitar as well as vocals. “Don’t ask me how we all got together,” Jon laughs. “It’s such a long time ago, but from word-of-mouth to just bumping into like-minded people, the band was formed. It just grew from there, like anything organic and eventually, all the right people fell into place.”

“We started playing places the likes of Die Spens, in Pretoria in late 1982, early ’83, Rockey 24 in Yeoville and any other gig we could get” Selby continues. “Slowly but surely we gained confidence and we became better musicians, and with that a certain cockiness too,” he smiles. “Somewhere down the line, there was this opportunity to be a guest band at Plum Crazy, (one of the top live clubs in Jo’burg at the time).

“Ballyhoo were the resident band and by that time,” he continues, “The word was out that we were a band to watch – venues filled up so I think we were ready for bigger things. “Plum Crazy was one of those occasions that I will always remember; as it was the biggest stage and audience we had played to in our short career. On the night we had the best sound yet and everything was good, so we cooked! People just stood there, mouths a gasp – it was surreal.” Their blend of pop and pomp and ceremony, the ability of the band to support Selby’s vocal volcano’s made for enticing listening.

Kim convinced A&R head Benjy Mudie to sign Petit Cheval and the band entered the studio with producer Greg Cutler to record their debut single, “Magical touch”, which went on become a huge radio hit right across the country. Shortly thereafter the line-up changed,both Francois and Harold left, and in came guitarist Craig Else, Sheldon Thomas on keyboards, and ex-eVoid drummer Danny de Wet. Rounding out the team were live sound engineer John Shaughnessy and ex-Ellamental manager Sue Carroll. Sue in particular played a pivotal role in keeping the monstrous, but fragile egos of the five musicians in check. Visionary stylist Nick Hauser – who went on to work with the likes of Mango Groove – was tasked with transforming the band’s image from one of a pre-grunge flannel shirt and jeans look to a more 1800’s Byron-esque dandy look. Kim recalls, “I’m not sure what their management was thinking, but before long the entire band was clad in make-up and seriously frilly shirts. I was freaked, but it worked – certainly in Jon’s case. The girls loved him. Lyrically too, Jon wrote some of the most amazing words to music I’ve ever read and listened to.” Ever the joker, Danny remembers his reasons for joining the band; “I loved the fact that we wore more make-up and higher heels than your mommy… wait a minute, didn’t Gene Simmons say that?”.

With the single in full flight, gigs pouring in, the machine that was now South Africa’s best chance at global presence was turning the country’s rather one-dimensional pop scene into the most dynamic it ever had been, and arguably ever was again. Following on from the success of the single Petit Cheval locked down in the studio over a period of time with co producer John Shaughnessy, recording the tracks that would form the bulk of their debut album “The voice of reason”.

Released in 1985 the album was packed with infectious but edgy pop singles in the form of “Once in a lifetime”,” Young Lions” and what was to become perhaps the band’s most enduring song “It was the wind”. “It was great to play in a band that did original music,” Johan mused. “There was so little fresh and inviting music coming out of South Africa at the time, it was great to be in a band where it [originality] came so easily. My favourite track is without question, “It Wasn’t You (It Was The Wind), The mix of ambient piano and near throbbing bass drumming was completely intoxicating, no matter how many times we played it.” .The first single from the album,” Once in a lifetime shot to the top of the charts, catapulting the band into a seemingly endless and exhausting routine of concerts, media interviews, and parties. From there on the cracks began to show as the group’s popularity grew. “So many bands from that time, that were great, suffered from internal issues that few survived,” remembers Saville, “and Cheval sadly fell victim to that.” Bass player Johan Griesel was the first to leave after the first album. “We were this big and popular band,“ Griesel recalls, “and yet we made little money, certainly not enough to live off of, which I found hugely frustrating.”

Augmented by various musical friends including uber bassist Chris Bekker the band returned to the studio in early 1986 to record a 6 track e.p,“The perfect gift”.Released to critical acclaim the album dispensed with any pop gloss that may have been present on the first album. Instead a darker, sonically heavier sound permeated the record on songs like “Glory Glory” and “The voice of reason”. Sadly the album failed to ignite and with rising tensions in the band reaching fever pitch the writing was clearly on the wall. “We played the last Concert In The Park and by that point I had become completely cynical of everything,” Jon recollects. “It was soon after that that we all went our separate ways.” With only two albums released between 1985 and 1986 (The Voice Of Reason and The Perfect Gift, Petit Cheval’s demise was entirely premature, to the frustration of their many thousands of fans. Petit Cheval and the great music they made signaled the end of an era that this country will never see again. “They were the last of the bands that married fashion with great music – eVoid, Ella mental, early Hotline, and Petit Cheval,” Kim confirms. “Luckily for us, the music remains as a reminder of a time when standing up and being counted made you an easy target for those not smart enough to hear.”

Jon left for overseas prior to the release of “The Perfect Gift” in 1987 has, in his words; ” become disillusioned with the ‘big fish in small pond’ syndrome and a rather vacuous existence of sex, drugs and not much rock’n’roll. Today Selby has an honours degree in Psychology and runs a successful design and branding agency. Married with two children, Jon’s musical side is still very much alive and well. “I still think music every day and relate to things from that mindset…will I record again? Watch this space!”

Johan Griesel went on to become one of the top international live concert engineers, mixing for the likes of Jeff Beck; the irrepressible Danny de Wet went on to front the Electric Petals and pound the skins in Wonderboom and passes the time of day as a senior record label exec; Craig Else moved to America and continues to play searing rock guitar in LA doing some joint-work with Tribe After Tribe leader Robbie Robb. ; Sheldon Thomas toured the US before returning to SA and now teaches Jazz piano at UCT; of the early members Harold Shenk is an active all-round musician and well-known producer within the Afrikaans music genre, original drummer Francois du Plessis is an avant-garde artist in Germany and shows his work at some of the top art gallery’s. 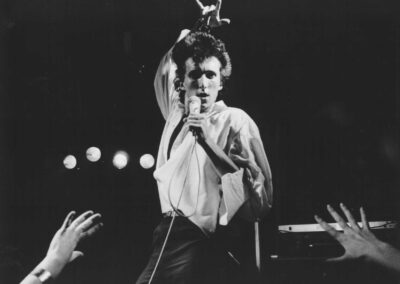 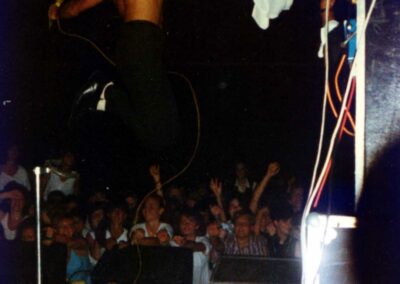 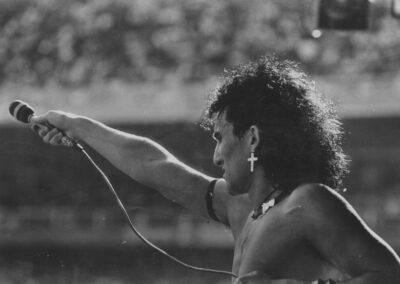 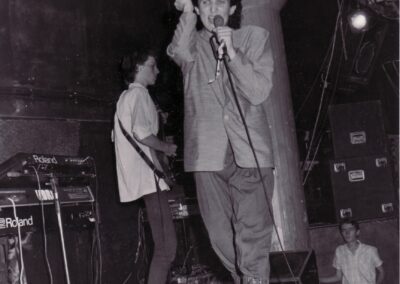 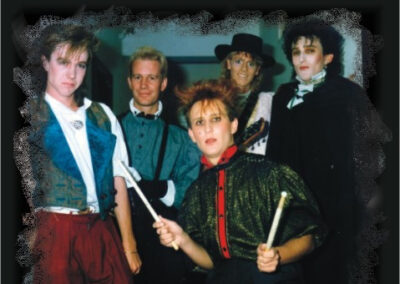