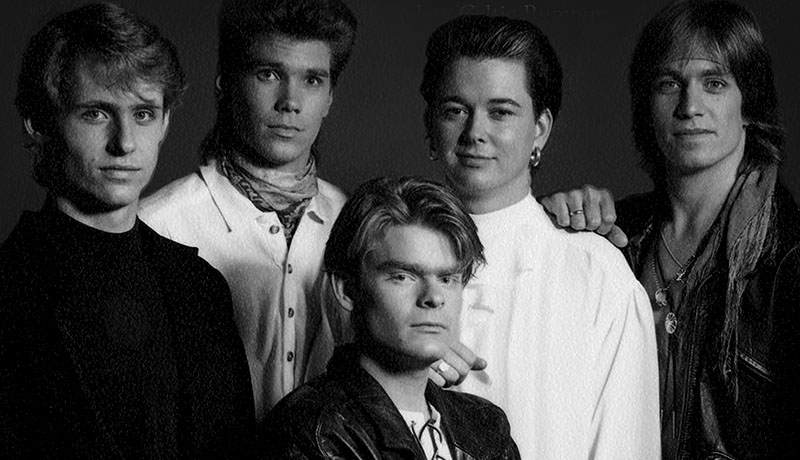 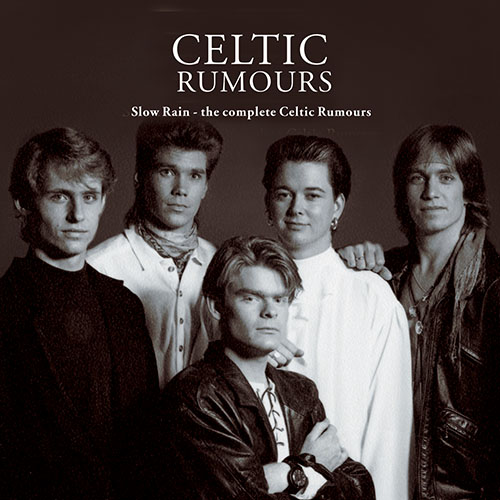 One of the highlights of the vibrant South African music scene in the mid-’80s was without doubt Celtic Rumours. Bursting out of Durban at the turn of the decade the band was inspired by the then-emerging ‘New Romantics’ musical movement that produced artists like Duran Duran, Spandau Ballet, etc. “Slow Rain..” brings together for the first time, on one cd, both of the band’s albums “This Day” and “Greed”.

My cousin Rob phoned to tell me that two of his friends from Westville Boys High were forming a band and needed a drummer. I arrived for the audition at Russell Warne’s folk’s place where they had set up in the garage with a DX7, microphone, and a banner with the band’s name ‘Empire Rage’ on it – I was hugely impressed. We connected immediately humour wise and when they played me U2’s ‘Unforgettable Fire’ for the first time I knew we were musically on the same wavelength too. Gary Turner, also a Westville boy, was recruited at the same time and I roped in my friend Richard du Buisson from Kloof High on bass soon afterward. We were all 15 or 16 at the time and heavily influenced by Simple Minds, U2, The Cure, and Depeche Mode, except Richard who was more into Iron Maiden.

We furiously started after-school rehearsals; first between the Warne and Van Staden garages and then later at Kevin’s Presbyterian church in Pinetown. Kevin’s best friend Roger Young who lived across the road from the Van Staden’s is credited for coming up with the name ‘Celtic Rumours’ after we all agreed that a name like The Cure’s ‘Japanese Whispers’ would be cool. We had the most incredible naive self-belief and that went a long way in the band’s rise to popularity. We would be playing gigs in dodgy clubs like SpeakEasy and being picked up by our parents afterward. We played many gigs at Durban’s famous Community Arts Workshop, on the City Hall steps, and the odd beer fest. Kevin was extremely prolific and had planned and composed 8 albums in advance, roping in the band to hone the arrangements.

Russell was soon to leave due to pressure from his folks I think. The quiet Sean Schulze, a classical piano student, also from Westville Boys was recruited to fill his place. Richard also left sometime later to join ‘Underground Press’ our slightly “heavier” rivals from Durban Boys High – as fans at the time you were either with them or with us. Lars Lofstrand joined on bass from Pinetown boys to complete the lineup – he had the most obscure sense of humour and a car! We went into C&G studios in Westville and recorded a demo (for R300) which we sent on to Barney Simon who playlisted two of the tracks at the time – ‘Somewhere’ and ‘Africa in Motion’.

It was around that time, during our matric year (1988), that we were invited to record a track for Barney’s ‘Flying Circus’ compilation up in JHB on a new label under RPM called ‘Umkhonto Records’. For some reason, Sean couldn’t make the journey and we roped in Cathy Simoni to play keyboards on the recording. We’d decided to record ‘Slow Rain’ because it was the odd song that we had planned to leave off the full album. When we arrived at Downtown studios the producer had worked out the entire score to one of our songs from the demo that he thought would be a great track to re-do. We told him we’d rather do this new song and without a bat of an eyelid trashed all his work and we began on Slow Rain. I remember Dog Detachment came in on one of the days to lay down another vocal track for ‘I Come Running’ – they had a computer, they were so huge, we were so in awe! I also remember Kevin being pissed off because Cathy had written Celtic Rumours on the wall at Downtown and put a huge red heart around it – Lars added crossbones. We saw Rocky Street for the first time. We drove back to Durban singing Slow Rain with Capella instruments all the way.

I left soon after that – I was more committed to my girlfriend at the time, the band was getting pissed off with my arriving late for rehearsals and National Service loomed. Geoff Wybrow, who was a little older and from the Durban scene was the last change in line up before the video to Slow Rain was shot and Celtic Rumours went on to record the full album ‘This Day’. I only saw Kevin a few times after that. Around the time that Wings Beat Bar in Braamfontein opened, he was playing covers and some originals 6 nights a week at the White Horse and recording with Communique. He was planning a solo career around the time of his death, a tragic car crash on the 26th December 1994, which also claimed the lives of his sister Carolanne and a friend.

Being a part of the band at such a young age was a fantastic experience (and loads of fun) for me and it’s been really great to hook up with Gary, Lars, and Kevin’s folks again to help put this album together.

I joined the band at the end of 1997, replacing Richard du Buisson on bass. The members at the time were Ross, Kevin, Gary, Sean, and myself. We practised in a church that Kevin supposedly attended. Our first break came when we were featured in the Highway Mail in February 1988. I had a friend who worked there who helped me organise the article. Everything seemed to snowball from that article onwards.

We had a demo under our belts and had sent it to various radio stations. Our first big gig came in the form of the ‘Battle of The Bands’ at the SpeakEasy Club. If my memory serves me correctly we won. It was our first taste of the lifestyles of a Rock Star. We started playing about 3 times a month, with various gigs from the Palladium Nite Club to the Community Arts workshop to the Easter Fiesta. The two highlights for me were ‘The Nite of the Living Dead’ and the Kloof High variety show, which was a gig that Ross had organised and which was really cool.

Barney Simon then discovered our demo and started playing it extensively on his show which helped us reach number 1 with ‘Somewhere’ on the alternative chart. Barney then selected us to be one of the featured bands on an album called the ‘Flying Circus’. We recorded the song ‘Slow Rain’ in Downtown studios in JHB which was our 1st and I would say our best attempt at recording. We played a successful gig at the Thunderdome in JHB to support the album, which saw Ross quitting the band and Geoff Wybrow joining on drums. I can remember us all being very disappointed at the departure of Ross and it felt very strange to have a new member in the band who did not seem to fit.

This gig was however our intro to the “mainstream SA music business”.

We were seen by a record company exec and subsequently signed to a new label called Umkhonto Records. We immediately started recording an album at Ron Selby’s studios in Durban which was eventually scrapped due to record company politics and the album was then finished up in JHB.

Our album was launched to huge success and radio play. The whirlwind then started and we were booked onto many gigs including the Rand Show and the Radio 5 roadshow which toured SA. The highlight for me was when we were invited to tour with the Psycho Reptiles and Shout on the Storm Deodorant Super Tour, which saw us traveling for well over a month playing 30 different towns around SA.?It was a great time for the band and we were swept up in the hype of the gigs, fans, in-store promotions, and TV appearances. The band was featured many times on music shows after that, including a live gig on MNet, a 1st for the channel.

In October of ’89, we played the Big Birthday Bash, which was the biggest crowd we had played to yet. Life was good and the band enjoyed all the trappings of success with many and various sponsors from clothes to watches to hairstylists and accessories. But this was when a few cracks started to appear. “Fame” went to many of the band member’s heads. The band then split into camps which caused much turmoil and we stopped practicing regularly.

The record company wanted a 2nd album for which we patched up our differences, even if it was just temporarily. We then launched a Cape tour which was when everything fell apart. The relationships were frayed as we had all grown in different directions. Two gigs before the end of the tour saw me being drafted into the army, with a then-unknown bass player in Stuart can’t remember his name (from The Usual) taking my place. The band split up after the tour and even though we did all become friends again, it was only a few years after that that Kevin was tragically killed in a car crash.

All in all, I look back on the band as some of the fondest memories that I have, with the events shaping my life and the person I am today. I wouldn’t change it for the world. 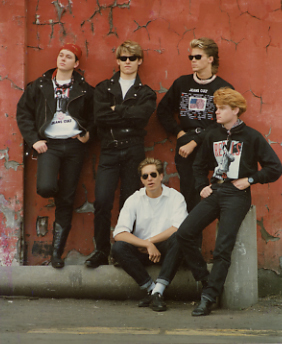 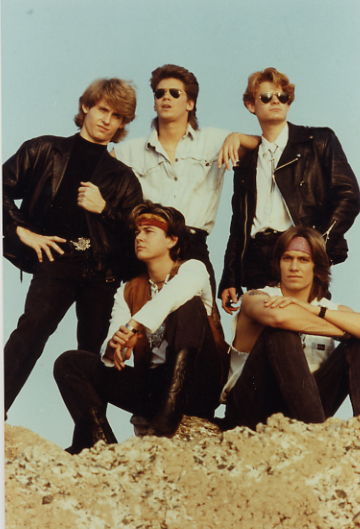 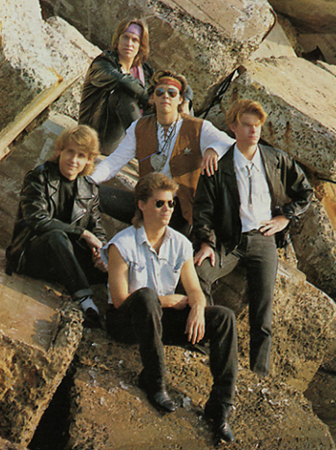 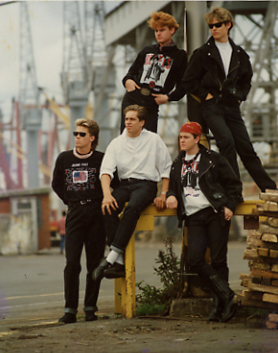 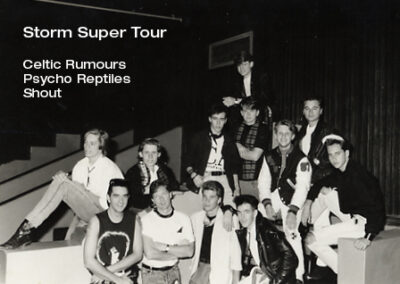 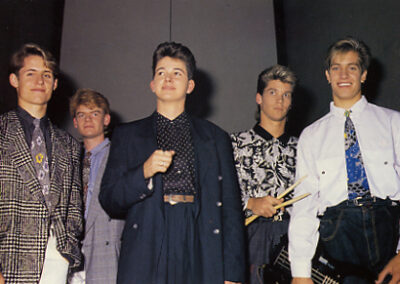 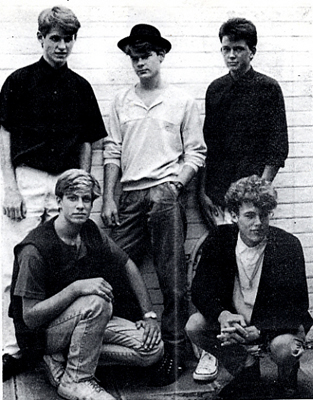