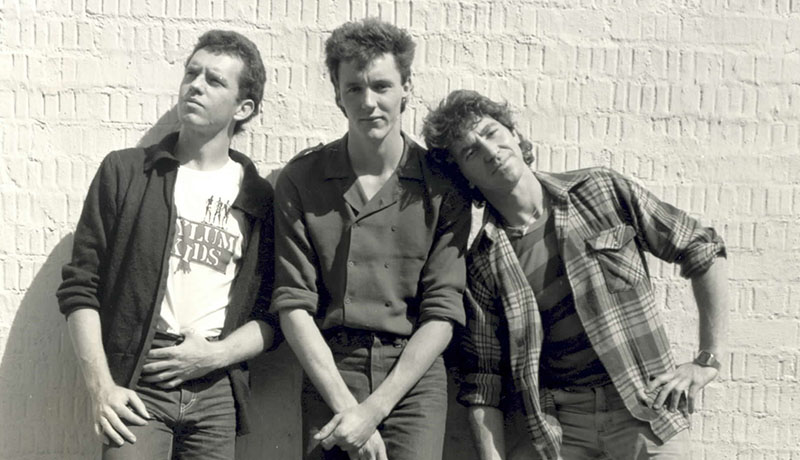 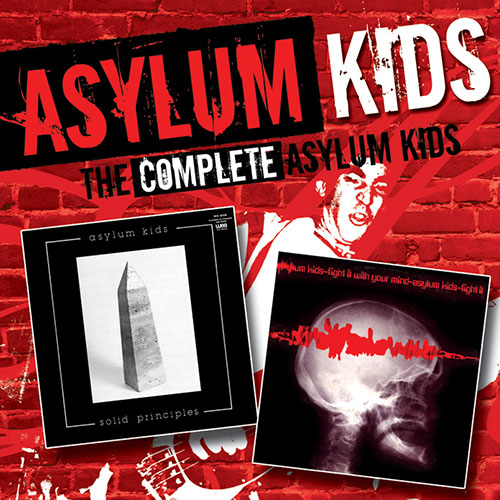 Born at a time when South Africa seemed on the fringe of perpetual madness, Robbi Robb, Dino Archon and Steve Howells took to stages around the country and voiced through song what the world was hungry to hear.

The beginnings of what was to become an unbreakable friendship began in the late 70’s between then Wea Records employee and record company scout Benjy Mudie and one slightly built, angst and passion-filled musician by the name of Robbi Robb. As the stepbrother to guitar legend Larry Amos, Robbi clearly shared great company, even in the infancy of his music career.

Playing in a band by the name of Shag, Robbi played alongside the future Tribe After Tribe bass player Robbie Whitlaw until, at the turn of the 80s, The Asylum Kids saw the light with the release of an aggressive track entitled “Schoolboy”. Capturing the post-punk era, the song turned heads with its rough and ready attitude and became an immediate underground success.

The group’s then-manager Bob Anderson, together with Robbi approached Benjy with a handful of demos all oozing with inflammatory lyrics and cocky gusto intent on eliciting a reaction from all who heard it.

Probably one of only a handful of bands playing anti-establishment punk rock with a uniquely South-African twist, The Asylum Kids fast gained favour. Between frontman Robbi, bass player Dino, drummer Steve, and businessman Bob, the four ran a tight ship and managed themselves in isolation.

The next introduction to the band was live, where record label suspicions were further heightened with performances that to this day are described as being revolutionary. “Even though most members of the band were in their early 20s at that stage,” Mudie recalls, “collectively The Asylum Kids was a combination of the socio-political stance of the MC5, fused with the abandon of the early Police material. They were incredibly tight live, coupled with vibrancy and excitement that only added fuel the orotund Robbi would soon become notorious for.”

Soon the band was in the studio putting together what was to become the Fight It With Your Mind album. The major hurdle to commercial success was pop radio, which was tightly controlled by the government of the day. Taking the “Fight It With Your Mind” single to radio was met with more trepidation than you would expect from the event organisers at the Wits Great Hall – since the band had already pipped the interest of the security police. Robbi’s onstage political stance also didn’t win him many friends with the government of the day.

Opening with infectious bass, “Fight It With Your Mind’s” assaulting guitar riffs were under shadowed only by Robbi’s spitting lyrics, which to this day still cut at the very being of every conscious South African. Its swing between punk rants and reggae-styled drumming leaves you chanting and rolling to the beat as only classic anthems can.

When it came to radio airplay the band hit a brick wall too. The only person to play it was David Gresham, on what was then The 5:30 Special on Springbok Radio. Radio 5 rejected it outright though, with no hesitation whatsoever. “It wasn’t that easy being in a progressive band in SA at that time,” Steve confirms. “There weren’t many venues to choose from, (so we created our own), apathy and ignorance were rife, and radio coverage was pretty nonexistent for bands like us.”

Undeterred, band and record company forged on completing a 16mm film called Fight It With Your Mind, never to be shown on South African television. No program would air the footage which cost R5000 to produce, which was a lot of money for a band who already had little. But they were desperate to find a way to break, to reach new fans where the SABC wouldn’t give them the platform. All thanks to the nationalist government who banned the material, labeling it revolutionary and inflammatory… all of which it was. As Dino so aptly puts it; “Being in this band was extremely exciting and controversial. It was just raw energy. The white youth scene was a powder keg and we were the fuse.”

Not for the sake of being controversial, mind you. The country at the time was on a hiding to nothing, kind courtesy of apartheid – and Robbi and Co insisted on kicking Joe Public awake and wiping away the indoctrination suffered by a nation confused and without identity.

The better part of the early 80s saw the band touring alongside Peach, a band equally as powerful if not as politically inspired as The Asylum Kids. The latter insisted on non-violent change in a country crying out for it. Controversy dogged the band at every opportunity from riots at many of the shows through to being followed around by the security police. Yet between the madness, the band forged ahead with the real aptitude and great song-writing ability, much of which was missed due to the state of the nation.

In 1982 at the height of the band’s national tour, the group performed in Joubert Park, Johannesburg, at a venue packed with between two and three thousand kids, all hungry to hear the music of a band they loved and respected for taking on the establishment and delivering music that made a real difference in their lives. “Robbi showed me some black and white footage from that gig,” Steve recalls. “I was stunned by how we sounded, an intense performance, powerful and soulful, possibly way ahead of our time then. Sure, we were naïve ( I know I was) and we made mistakes in many aspects of our lives at the time, and we were three very different individuals working, living, and playing together, but that’s life and learning to live.”

Midway through the band’s set, Robbi screamed out, “fuck John Vorster, fuck the government!” Minutes later tear gas canisters were lobbed through the windows. A mini-riot ensued. With feedback howling through the PA, the band was hustled out of a backroom toilet window and away into the night. This and many other stories made headlines and won them as many new fans as the number of misdemeanors the state was notching up against them.

“The Radio Rats gnawed the chill right out of the night, The Cherry Faced Lurchers punished the sidewalks and called our ignorance ‘darkies’. We were gents at that time and the gents knew who we were, the revolution hung in the air like the piss stench in the ally behind Blue Beat, where legends played at Legends, and the decadent danced at the King Of Clubs. ‘Pork and Cheese’ gangs cruised in one night and it was like the Rolling Stones at Altamont. Someone got stabbed, and Aggett hung himself from a bar of soap, pigeons shat and fucked on park benches, on signs that said ‘Whites Only. The wild youth didn’t want to talk about it; it was all about me, yeah, all about me!” – Robbi Robb

A year later the band returned to the studio to record Solid Principles, which today still stands as one of the finest rock records to ever come out of South Africa. More song-oriented and playing tighter than they had ever done so before, The Asylum Kids wrote and recorded an album regarded as extraordinary by critics and fans alike. Lyrically Robbi was always inspired by the likes of William Blake and Alistair Crowley, which gives the band darkness amongst the adrenaline-fuelled energy at the time. Says Dino: “We just wanted to be the best at what we did. Create great songs and play them well live, with great balls and as much passion and truth as we could.”

“We had a yearning for freedom in all of its forms,” Steve concurs. “Freedom to play the music that we wanted to play and for whoever would listen, to be whoever we wanted to be and do whatever we wanted to do, as long as we didn’t hurt anyone or anything along the way.”

Next Solid Principles dropped – a mini album with six long and dark tracks. Immediate radio rejection followed. Still seeped in political angst, the band’s label Wea had a very strong social conscience, which afforded the band the outlet to vent. Happy to release music that was relevant, the label stood by a band that within a world context stood head and shoulders above anything else happening at the time. The fact that the band was white and doing rock when the rest of the first world was packing up and heading homeward left the music of The Asylum kids little-heard beyond our borders.

By musical example “I See Them Laughing” was one of the more immediate songs that are held together with tight strumming, often overflowing bass and a vocal almost pleading to the listener to hear the words.

Add to that “Shore’s End (Chapter One)”, winding up and rolling out with subdued vocal commentary into an acerbic chorus written as if to be sung as a mantra and statement, a cry and call to wake up and play a part in making great music and free expression the norm.

“Johnny”, as with “Schoolboy” both made up in musicality what production couldn’t quite deliver at the time of recording. Shouting ‘Isolation’ Robbi, Dino and Steve played with as much vigour as they moved in live performance. Downbeat, fuelled with subtle guitar solos and drum rolls, Robb was given the perfect platform to vent his rhyme and reason that today pricks the past and replays perfectly in the current.

The band then began to fragment with Robbi forming Tribe After Tribe, Steve joined The Dynamics and Dino too went off overseas to pursue new possibilities, and in their wake, South Africa was left with two exceptional albums still regarded today as music that affected not only a nation of followers but the very way many more musicians made music thereafter.

The band intimately reflected what was happening socially in a country riddled with fear and political upheaval. Robbi, as an individual, struggled to be accepted as a musician who cared about music. With many black friends at a time when it was frowned upon by most, Robbi spent a great deal of his free time in the townships which affected the work he would go on and release as part of Tribe After Tribe.

Some may argue that the system beat The Asylum Kids, but this was true for everyone who ever stood up to be counted. The biggest difference with this band was the fact that they fought back and in the process helped shape a mindset and generation that went on to effect change we all bear the fruits of today. “We were the light in the dark ages of rock in SA,” Dino exits. “We kicked them in the teeth when it mattered most!”

“Perhaps our contribution to the full catastrophe was to be a reminder that the first thing that is really needed to make a good rock ’n roll band is the spirit of it. If one day Benjy Mudie builds a monument to the spirit of South African rock ’n roll it will have the silhouette of The Asylum Kids?” – Robbi Robb circa 2005 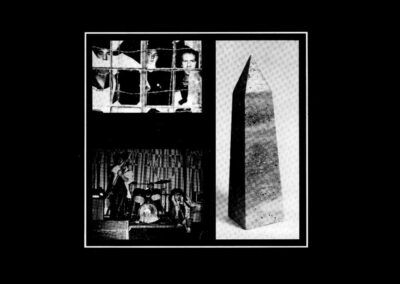 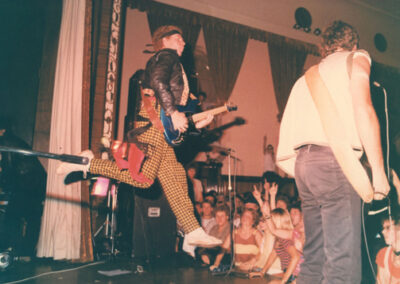 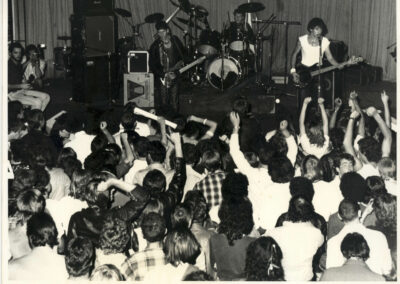 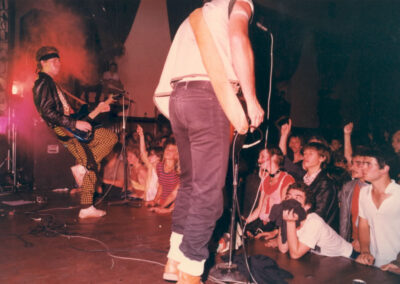 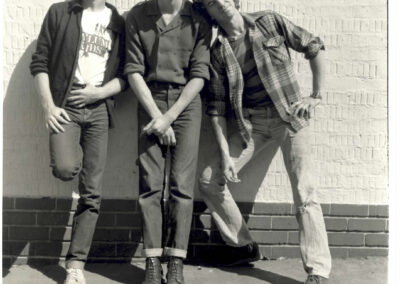 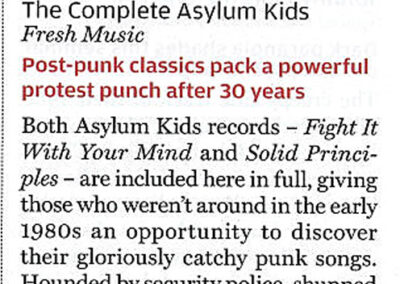 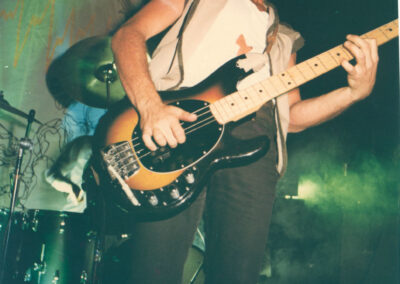 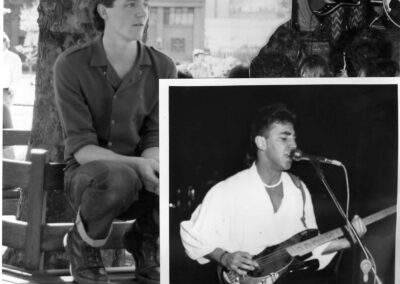 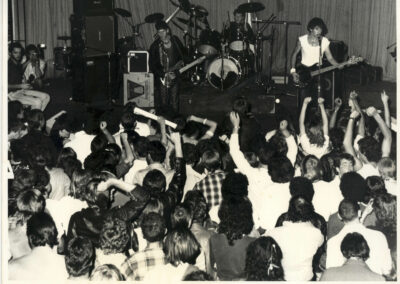 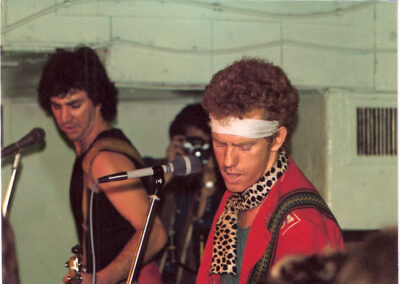 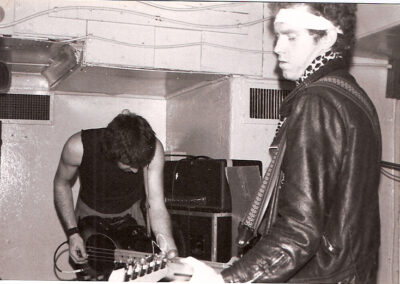 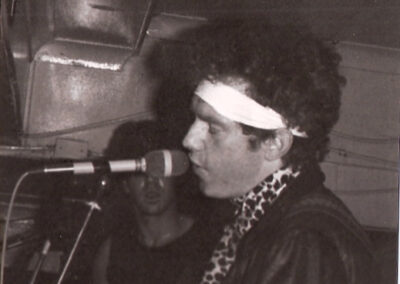 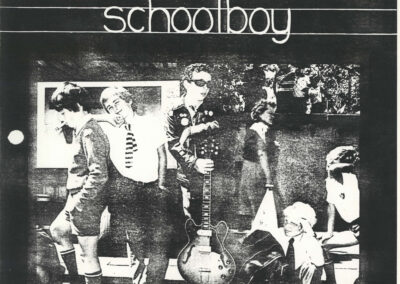 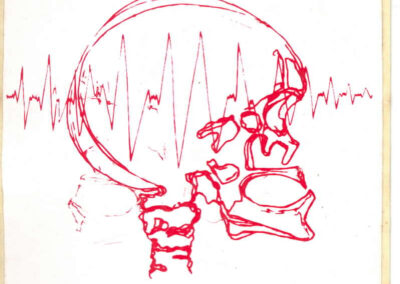 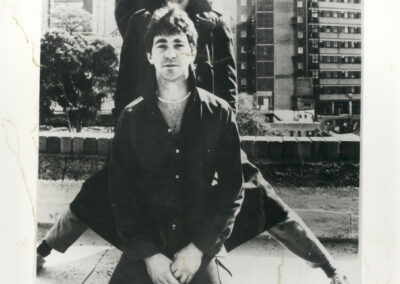