April 2001 saw the debut album release of the South African/English collaboration Helloangel. The album, “Balance”, was the outcome of three months of recording during British singer/songwriter Julie Bell’s two-year stay in South Africa. Having moved from the music culture capital of the world, London to Johannesburg in 1998 Bell joined forces with the renowned South African producer Adrian Levi through a chance introduction. The couple hit it off immediately finding common ground through their joint experiences of South Africa and England. Coincidentally both had been part of bands signed to EMI. Levi had previously spent a year in England playing bass for Ellamental and Bell demo-ing new material for the now-defunct BC Dance. After a solid year-long spell of writing, rehearsing, and recording the album was finished bar intense production work by Levi to produce an album that has every chance of working in South Africa and internationally. Signed up immediately by Benjy Mudie of Fresh Music, Helloangel got the chance to be heard with the release of the album’s first single “I don’t care” 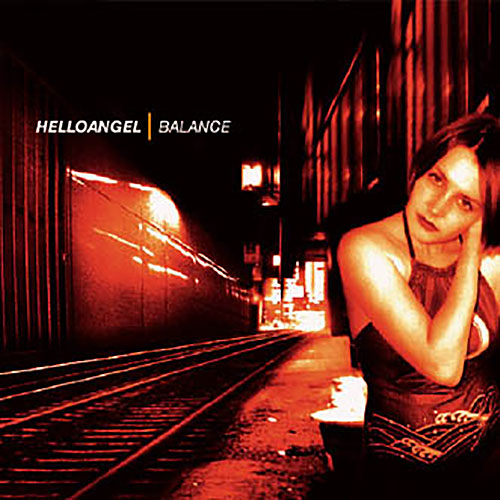 Both influenced by music from the northern hemisphere and enlightened by the sounds coming out of the new South Africa Helloangel set out to create a sound that represented their eclectic tastes… It’s a sound that is as varied as an album can be through a blend of catchy but edgy pop tunes like the first single and video I Don’t Care. Check out the sheer drive of “You” the offbeat and downright weird Square World and the stunning, dreamy Inspired. With lyrics that are true, original BALANCE represents something fresh for 2001. The pair look set to get back together in the winter of 2001 to record the follow-up to “Balance” .

For whom the Bell tolls (In her own words)

You
What a woman would be prepared to do to keep her man. The verses show bravado and the chorus is slightly desperate. She contradicts herself because she is so unsure about what action to take.

Square World
This is our take on the world and how odd it is when you look it closely. You know how a word changes its meaning and becomes nonsensical when you repeat it over and over. There are lots of shapes in this song.

I Don¹t Care
This is how it must feel to be a beautiful heartless teenager and not care about the men you spurn. On the surface it comes across as quite a frivolous pop song but if you look at the words it¹s pretty cruel. A finger up to everyone song, for five minutes any way until the teenage tantrum blows over.

Perfume
Being with someone takes you over physically, even the way you smell. And so it¹s as though you could slice bits off the way you feel. It¹s supposed to be a sensual song.

Come With Me
This is an ode to the wonderful Debbie Harry, musically and lyrically. A woman is goading her man by saying that if he is fed up and down on his life then he should get up and leave with her and change his destiny. It¹s a hopeful and encouraging song because she is kicking his backside into gear.

Want
There’s an undercurrent of tension beneath this track. On the one hand, the woman is offering herself to him but on the other, she is making demands and blaming him for not meeting them. Want is all I want, take is all you give. Even in love, we try to negotiate the best deal for ourselves.

Sleeping In
People stay in bed when they are depressed, ill, or in love. This is a song about contentment, about being satisfied to spend time with someone and just arb. Having the luxury to sleep in is one of the things I fantasise about. The bed is underrated.

Love in the Sink
The style is minimalist because there isn¹t much left of this poor man¹s life. She left him on his own and he struggles to get from one end of the day to the other. Even choosing clothes to wear is a difficult task. What was she thinking throwing is love in the sink like a used teabag.

She Feels
This is about a vulnerable woman who has just reached the other side of her prime. As she gets older the more she is taken for granted and is weakened by the inevitable belief that one-day she will be replaced. When I wrote this song I was pleading on her behalf.

Inspired
Being inspired and energised is the best thing to come out of being in love. I wanted the melody to be slightly deadpan and the lyrics to be a fairytale. I believe that women are getting their femininity back. There is a backlash against the 80s and 90s selfish independence and most of us now want some kind of a knight in shining armor.