Get Fresh with 20 killer tracks at an unbelievably el cheapo price! Celebrating the first five years of Fresh Music as a 100% South African music label Get Fresh includes humongous hits by Blk Sonshine, Nianell, Tait, Cofield Mundi, Egyptian Nursery, Naked and Sunways…. some fab songs by Citrus, Biff ‘n Jethro, AntiGravity and Susan May as well as five bonus tracks in the form of live, alternate mixes and unreleased material… 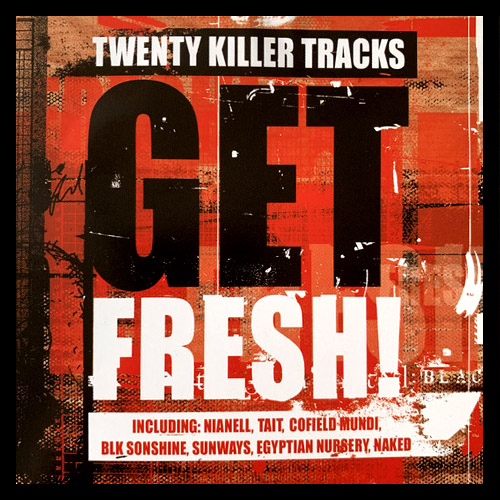 Cofield Mundi – Leave the bones (from the album “Ceremony” FRESHCD 134)
Cofield Mundi writes the most wonderfully eclectic and passionate music, her debut album is packed with hauntingly stark songs that showcase her magnificent songwriting skills and poignant from-the-heart vocals to great effect. Lyrically “Leave the bones” deals with the eternal love-hate relationship between the sexes and its sheer emotionality.

Tait – Relate (from the “Tait” album)
We’ve always had a ‘thing’ for guitar bands and particularly groups who mesh the majestic power of rock with a sheer pop sensibility. Chris Tait manages to do both with style and grace…”Relate” has one of the most pulverizing riffs you’ve heard for many a year but at the same time has lyrical magic that most bands spend a lifetime trying to write. It’s a really BIG tune!

Frank Opperman – Johnny is nie dood nie (from the album “Kombuis Musiek” FRESHCD 125)
It’s often been said that music transcends language barriers and that’s something that Fresh has always identified with….after all a great song is a great song! The “Kombuis Musiek” project was put together by Matthew van der Want and Gary Herselman as a tribute to one of Africa’s greatest songwriters, Koos Kombuis. It features a host of diverse performers including Frank Opperman whose unique take of “Johnny…” is at once both groundbreaking and reverent.

Nianell – Have faith (from the album “Who painted the moon?”)
With her nearly 3-octave vocal range, killer hit songs, and a tour schedule that would flatten most artists Nianell has gone on to achieve so much in the last 12 months and is, without doubt, one of the greatest singers that this country has produced. “Have faith” is the first of many hit singles off her debut album.

Sunways – Color me in (off “The Moon is a spoon”)
When it comes to no–holds–barred–right–in–your–face rock there are few bands anywhere in the world that can match the intensity of Sunways. “Color me in” was a smash Top 10 radio hit, deservedly earned them the SAMA award for “Best rock album” and is everything a classic rock anthem should be… short, sweet, and akin to a punch in the solar plexus!

Blk Sonshine – Born in a taxi (off the album “Blk Sonshine”)
One day in late ’99 Craig Dodds of Egyptian Nursery popped by the office to play us some new EN mixes and laid a 2 track cd of a band he had recently demo-ed. When we heard ‘…Taxi’ we just knew that, One…This was a hit and, Two…we really wanted to work with this band. Neo Muyanga and Masauko Chipembere epitomise what being a real musician are all about …they are passionate about their art, highly articulate, and care deeply about the world….and they also write such great songs! Even without the ‘benefit’ of the Santam tv ad “Born in a taxi” would still be one of the greatest pop songs ever.

Acoustic Kitchen – Grid (off the EP “Acoustic Kitchen”)
Although the band didn’t last long Acoustic Kitchen were always very different to everyone else out there…loping, lazy beats, jangly acoustics, and dark, brooding songs that radio sadly failed to understand… but we loved the spaciness of it all and “Grid” is still one of our favourite late night ‘groove’ tunes.

RSL featuring Ladysmith Black Mambazo – Elungelo (off the album “Rerooted”)
When drum n’ bass meets Grammy Award-winning Zulu acapella there’s bound to be magic in the groove… Taken from the frontier blazing compilation “Rerooted” this track shows what’s possible when traditionally diametrically opposed forms of music melt, fuse, and mesh to create a new hybrid that is both exhilarating and unique…

AntiGravity – Disaster (off the EP “AntiGravity”)
‘Disaster” was a huge Top 40 hit in late ’98…all buzzsaw guitars, heavy breakbeats, and shouty vocals ala Prodigy. For a brief moment in time AntiGravity was the name on every respectable nu-rocker’s lips and the band’s incendiary live performances were legendary in clubland.Alas, ’twas not to be and in what seems to be true SA rock band tradition they self-imploded.

Citrus – Freedom (from the e.p “Freedom”)
Citrus was the bastard offshoot child of Naked guitarist Crallen who played most of the instruments and self-produced it. Its Latin-tinged pop feel is topped by a superb flute solo from fellow Nakette Kaolin Thompson and it’s still one of the happiest, vibiest singles that the label put out in the heady year of 1998.

Biff ‘n Jethro – I guess this is the new South Africa (from the EP “Biff ‘n Jethro”)
Oh, boy did this single cause kak! After a few plays on the radio it was pulled as being “too negative” and “anti-democratic” (funny one that) . Fresh took a lot of flack for even putting it out… they said the same thing about punk and rap! Biff ‘n Jethro (who to this day remain faceless as we did the deal over the phone) tell it like it is on this hard-hitting poetry in motion is as relevant today as it was then…so there!

Naked – Naked-the Missionary remix (from the album “Bone needs flesh”)
We first heard the eclectic musical weavings of Naked at a private showcase in Kaolin’s lounge…they had been together just a couple of weeks but it was clear that they had something special. This, their debut single, was our second consecutive No.1 single and is still one of the most played SA songs on the radio today.

Egyptian Nursery – God’s Window (from the album “New Anthem”)
This is where the Fresh Music story all started… our first signing, Benjy had met founder Craigie Dodds in the dying months of 1997. One day he played us the demos of “God’s Window” and “Still” and told us about his dream to do an album of original songs along with singer Ariane and rapper Mojama… we gave the go-ahead for the album and the result was the wonderful “New Anthem”. The first single “God’s Window” swept to the top of the charts and gave us our first Number 1, something that still fills Fresh Music with pride.

Blk Sonshine – Soul smile (live)
In our humble opinion one of the most beautiful love songs ever written, again recorded live for Michelle’s show on SAFM.

Tait – Relate (acoustic version)
Chris did this wonderful acoustic version at Street Level Studios in 2002 and as much as we love the rawness of the ‘electric’ version this one moves the soul big time.

Susan May – I don’t have to crawl (unreleased demo)
Susan May’s gothic alt-country voice, not too dissimilar to Stevie Nicks, does such justice to this Emmylou Harris classic….tailor made for rainy, red wine nights!

Mr. Mann featuring Pointblank – The Bermuda Triangle (unreleased in SA)
This crazy Cape Town-based collective broke up before we could release this amazing fusion of hip-hop, classical, and opera…released on a Universal Music USA compilation in 2000.